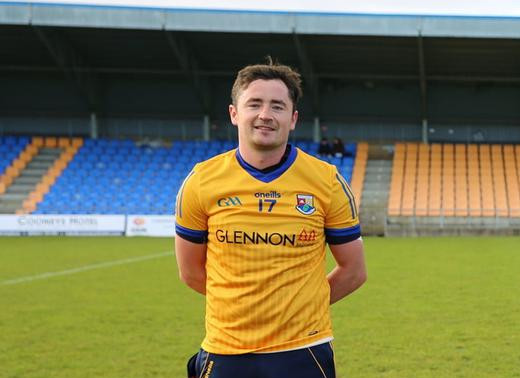 The sides met earlier in this year’s championship at Glennon Brothers Pearse Park with Longford edging the contest by a point, 1-16 to 1-15, despite having Evan Tully red-carded before half-time.

Tony: ‘Johnny, you played in the 2014 Lory Meagher Final victory over Fermanagh, and although you and the team are back at Croke Park again, unfortunately due to an injury, you will not be able to play in the final.’

Johnny: ‘2014 was a great occasion and a great day for Longford hurling especially as we won that day. As you said Tony, I can’t play this time around because I had an operation on my shoulder last week after suffering the injury against Monaghan. The team’s goal at the start of the year was to get to Croke Park, we have achieved that aim and hopefully, we can go one step further and win on Saturday, like we did in 2014.’

Tony: ‘Longford lost the National League Final narrowly to Fermanagh, but Croke Park is the Mecca. It’s a venue that all GAA players aspire to play in and the Longford hurlers have that opportunity on Saturday, but Louth will be difficult opponents.’

Johnny: ‘Growing up, you are looking at all the big games in Croke Park, it’s the hallowed ground and it’s the goal of all players to play there. Louth are a very good team that stand in our way. They play like ourselves, they are good playing out from the back and they like to play hurling the way it should be played. We beat them last time out at home with just fourteen players for the majority of the game. It’s going to be a tight battle, but I believe that we have the edge.’

Tony: ‘Louth won the competition in 2020, so it’s their second appearance in three years.’

Johnny: ‘It was strange back then. There was no promotion and no crowds allowed in 2020. They will know the lay of the land at Croke Park. They have a lot of players who played there two years ago, so it is still fresh in their mind. As well as beating them this year, we also beat them in last year’s championship, so they will be looking for revenge. Hopefully, it will be Longford that win on Saturday and earn promotion to the Nicky Rackard.’

Tony: ‘Longford also have players who played in the Lory Meagher Final at Croke Park, as six of the current squad played in that 2014 final, so that experience will be vital.’

Tony: ‘One of the key Longford players is Joe O’Brien and he not only tasted Lory Meagher success in 2014, but he also enjoyed winning the competition back in 2010 with victory over Donegal, so he is a seasoned quality campaigner.’

Johnny: ‘Absolutely, Joe has been around a very long time with our senior team, he’s a stalwart and he is still producing the goods. The last game against Cavan, he really stepped it up a gear when it was needed. Joe has it in his locker and he will no doubt produce another great display on Saturday. Joe has been unbelievable for Longford hurling and he is one of the all-time greats of Longford.’

Tony ‘There has been a great vibe in the panel from day one and a great camaraderie between everyone, that has been an important factor throughout the season.’

Johnny: ‘We are such a tight group. We only have three senior clubs and four minor clubs in the county, but we are like a club team, we are like family. The ethos we have is to work hard for each other and to give every last ounce that we have. I would love to be out there myself on Saturday, but I have huge trust in the lads to be triumphant, and I cannot wait for the big match.’

Tony: ‘If Longford win, you and the Vice-Captain, Cathal Mullane, will be lifting the trophy at headquarters.’

Johnny: ‘That is for sure. I will have one hand on the trophy anyway, the other hand will be in the sling. Cathal is another good lad. He came to Longford from Limerick and joined the panel in 2014. He really stepped it up a level for us. He was in the Limerick Senior panel before his move to Edgeworthstown. He is a Longford man now and he has Longford blood in him.’

Tony: ‘The team have recovered well since that opening day one-point loss to Leitrim, winning every game since, and that must give everyone confidence ahead of the big day.’

Johnny: ‘That was a really hard one to take but we were grounded. It was a mental set-back for us all, but we knuckled down and just did what was needed, winning each week thereafter. We are on a roll and although, we have not won any game by more than one point or two points, it shows the great character that we have. We have not even played that well yet. We are not just scoring the goals that we should be scoring, but I believe that it will click on Saturday. I have no doubt that we will get the job done and bring back the Lory Meagher Cup to Longford.’